Jim Davey has become the first person in Saskatchewan to sell a cannabis retail permit.

Davey, the owner of Curativa Cannabis, sold his permit to sell legal marijuana in North Battleford to Fire and Flower Inc., an Edmonton-based company.

It’s the first reported sale of a Saskatchewan retail cannabis permit and it was a true turnkey affair, according to Fire and Flower.

“Jim ran [the store] the first day with his wife Sandy and their staff and then they transitioned the organization and all staffing over to Fire and Flower on Oct. 18,” said Nathan Mison, a vice-president with Fire and Flower.

Couldn’t sell until after opening

It had to happen that way.

Under the rules set out by the Saskatchewan Liquor and Gaming Authority (SLGA), the people who won a chance at running one of Saskatchewan’s 51 retail pot stores couldn’t sell their permit until after legalization and until after their brick-and-mortar store opened.

The new owners need to follow some rules too, said David Morris, a spokesperson for the SLGA.

“The buyer of the cannabis retail store would need to also complete the permitting process including the formal application paperwork, submitting and passing a good character check, approval of an inventory management system, a security review of the facility, etc.” 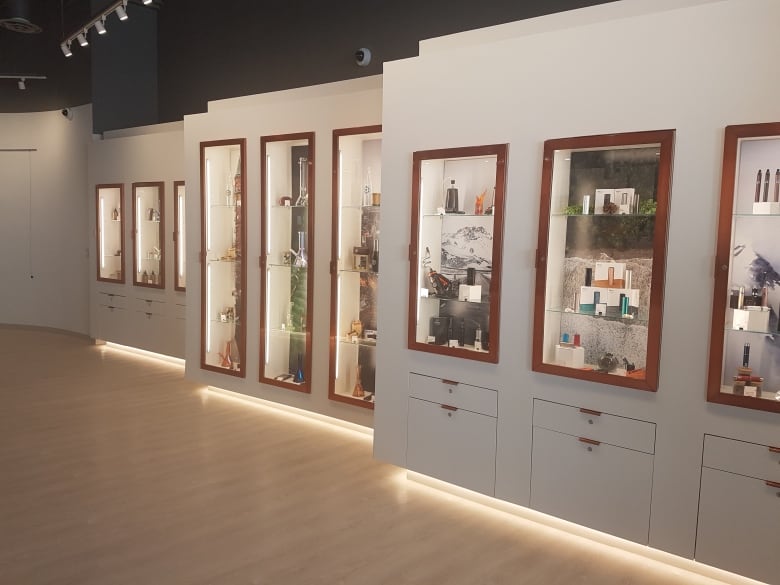 Fire and Flower is no stranger to Saskatchewan. The company won the permit for Yorkton and opened that store on legalization day.

Neither Davey nor Mison would comment on how much the North Battleford permit sold for.

How’d the first few days ago?

Mison said the stores saw some repeat customers and even some people buying up to the legal possession limit in Saskatchewan (30 dried grams).

“I think that’s because there’s been such coverage about supply that people are stocking up because they don’t know when supply will dry up,” said Mison.

There is no limit to how much cannabis you can possess in your home, unless your landlord or building owner has set such rules, according to the provincial government.

Some strains at the Yorkton and North Battleford stores have run out, particularly some with high-THC contents.

“I think the high-THC was just because people were familiar with them,” said Mison.

But the stores have been able to maintain their overall supplies, he added.

“Alien Dawg,” a high-THC strain, was also a hot seller at Eden, the cannabis store opened near Pilot Butte, according to owner Allen Kilback.

The only thing Kilback has run out of are pre-rolled cannabis joints. He only had two cases of those, he said.

Cannabis stock rout could be the catalyst for pot industry’s next big deal, investor says

Haute710 The next Company to look out for this year.

Class is in session at Canada’s first pot school

Cannabis stock rout could be the catalyst for pot industry’s next big deal, investor...

Why Amsterdam is jealous of America’s growing weed industry

Retail Sales Fall for a Third Month in a Row

Dozens of new cannabis stores are expected to open in the coming weeks across Alberta, with Calgary leading the way. Although only two stores have opened in...

Jim Davey has become the first person in Saskatchewan to sell a cannabis retail permit. Davey, the owner of Curativa Cannabis, sold his permit to...

Cannabis stock rout could be the catalyst for pot industry’s next big deal, investor...

Pot stocks continued a six-day rout Tuesday amid Canadian supply shortages, creating a favourable environment for the next big investment in the space, according...

CNBC's Jim Cramer said on Friday that Canadian pot stock Canopy Growth is now a buy. Cramer, who has always viewed Canopy as a best-in-class among the cannabis companies,...

Newspaper is your news, entertainment, music & fashion website. We provide you with the latest news and videos straight from the entertainment industry.
Contact us: contact@yoursite.com

Vancouver’s Real Estate Market could Crash Thanks to China

The ‘Frenzy’ for Manhattan Commercial Real Estate is Over

Brexit would Trigger ‘Economic and Financial Shock’ to UK